The doorbell rang, and Harrison knew exactly who it was. He opened the door to greet his friend, Matias, and Matias’ wife, Lila. “Hey guys, come in!” Harrison greeted the couple, ushering them into his house. When Harrison’s wife, Mackenzie, heard the doorbell ring, she rushed in from the family room. Everybody exchanged greetings hugged each other warmly. Harrison and Matias had been best friends for years, and their closeness meant their wives were also introduced to each other. Fortunately enough, Lila and Mackenzie also happened to get along really well, which made for great chemistry among the four friends.

Because everybody was such good friends with each other, they made a habit of visiting each other every weekend just to drink some beers, play some games, and have a good time with good friends. One of the games that they liked to play whenever they got together was a game that they nicknamed “Drunk truth or dare”. The game was simple enough as it was simply a spin on the classic game of truth or dare. The catch to this game, though, was that it was only played late in the evening after everyone had consumed many drinks. During the last game of drunk truth or dare, which occurred when Harrison and Mackenzie visited Matias’ house, Lila was given the option to receive either a dare or a prompt that she had to respond honestly to. In her intoxicated state, Lila chose the option of truth and was asked what one of her favorite sexual fantasies was. Lila made good on her promise to answer honestly, revealing that she had always fantasized about participating in an orgy with her husband, Harrison, and Mackenzie. When Lila admitted this, everyone in the room seemed to sober up a little bit. At first, Lila thought she had said something that she was not supposed to and began to apologize, only to be told by Harrison that that was necessary. At that moment, Harrison revealed to Lila that he had had the same fantasy for quite some time as well. Afterward, Mackenzie admitted to fantasizing about being in an orgy with Harrison, Lila, and Matias as well. Finally, even Matias confessed to having the same sexual desire. Everyone in the room was amazed at how much they had in common, and they promised each other that, the next time they got together, they would live out their sexual fantasies. Tonight was the evening in which that was going to happen.

As soon as Lila and Matias entered the family room, the atmosphere changed completely. The once friendly and convivial atmosphere was now replaced by a mood of pure unadulterated lust. Everybody’s hands were all over everybody else in an attempt to get naked as quickly as possible. Lila pressed her soft, plump lips against Harrison’s, and Matias was groping and grabbing at Mackenzie’s full, voluptuous tits while he made out with his best friend’s wife. Everybody helped each other take off their clothes and it was not long before everyone in the room was completely naked. Harrison had to take a moment to stop and admire Lila’s gorgeous body, and Matias felt the need to do the same to Mackenzie’s body. The women seemed to be thinking the same thing, as they both dropped to their knees at the same time, eager to fill their mouths hard, throbbing dick.

Lila and Mackenzie were kneeling back-to-back as they used their mouths to pleasure the other’s spouse. Lila wrapped one hand around the base of Harrison’s shaft and stroked him off into her wet, needy mouth. Her tongue moved in swift and eager circles around his head, eagerly lapping up any drop of salty precum that it could find. Matias had his hands on the back of Mackenzie’s head and was pushing her down on his rock-hard, veiny shaft, moaning as he felt himself slide deeper and deeper into her greedy, wet throat. 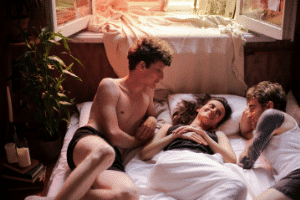