Lauren leaned back in the leather recliner. The needle danced along her skin, etching deep. She exhaled a storm of smoke. Her cigarette perched like a wounded bird in between her fingers. It was a souvenir, saved for the better part of a year at the bottom of her bag for an occasion such as this.

Her fist clenched and released. The searing sensation swallowed her whole arm one moment and faded into numbness the next. When the pain creeped back, it always colonized more area. She couldn’t help but think about him every time the burning began.

The way he would fuck her and discard her, night after night, year after year. How her panties would be soaked on the taxi rides home and her thoughts would derail. There were nights of tears and nights where she was a shadow without emotion. A pervading calm would take hold, an acceptance that he was all she deserved.

“I’m finished,” Eve said. She set down her equipment and wiped off the tattoo one last time. Lauren offered her the cigarette. Eve took a drag while Lauren examined the design in the large mirror across from her.

It was closure. It was twisted. It reminded her who was in control. The calm was back, but it had changed form. It was the calm that someone might feel after a near-death experience. She was forging her future, and she sure as hell didn’t need him. Lauren broke her gaze from the tattoo. She wanted to tell Eve what it meant to her, how everything had changed. The words wouldn’t come.

“You don’t have to thank me,” Eve said, seeming to guess from the look in her eyes. She said the word “thank” with distaste, as if it were an insult. Eve didn’t talk much. She was the kind of person that had a weight to them, the weight of what was left unsaid. It was not shyness, but a sort of discipline.

“Yes, I do,” Lauren said. She reached for Eve’s arm, pulling her closer. She expected to be shoved back full force or for Eve to unleash a seething reprimand. Yet, neither happened. Instead, she surveyed her as if she were a mere curiosity that she was seeing in detail for the first time. Eve put out the cigarette in a mug of cold coffee on the counter and moved in closer.

Eve was Japanese American with ink webbed across her arms and neck. Her hair was long and black, secured in a loose bun that spilled wisps down the sides of her face. She wore a dark floral button-up with the sleeves rolled almost to her shoulders and black jeans. She embodied an authentic gothic mystique that entranced Lauren from the moment they met.

Eve was closer but stood still, waiting. She looked undeterred and stoic. Lauren hesitated before leaning in to kiss her neck, careful to be soft and light. She was only going to leave a couple pecks when Eve reached behind her head to keep her there. Lauren traced the designs on her skin with her tongue and lips until Eve’s hand became a talon.

Lauren continued until Eve’s breathing grew ragged and she wrenched her back by the hair. Eve kissed Lauren with a ferocity that surprised her. Their tongues were competitive and unsatisfied, clashing again and again. Lauren unbuttoned Eve’s jeans. Eve pulled them down before Lauren pushed her into the incliner.

She felt heat in her cheeks. Doubt trickled into her thoughts. She wasn’t sure if she really knew what she was doing. What if she couldn’t actually please her?  What if this wasn’t a show of appreciation but a selfish attempt to get him out of her head, to banish him. Her thoughts threatened to crack her confidence, but she resisted. The look in Eve’s eyes made her want to be naked, to shed her old skin and become something else.

Instinct took over. She pulled down Lauren’s black underwear to reveal her dark hairy pussy. Before she could question herself, she landed a kiss on Eve’s inner thigh and started slow like before. Eve relaxed against her lips, until her tongue became involved. She recoiled and twitched. Eve pulled her head back.

“Use your fingers first,” she demanded. Lauren took it as a challenge. Her fingers stroked her pussy and inner thighs causing Eve to quiver.

She dipped in two fingers and Eve let out a chilling moan. She didn’t go deep at first. Only an inch or so where she flicked her fingers. She straitened them out to investigate deeper. Eve lifted her hips. Her mouth was agape, letting out subtle sounds. Lauren was getting wet, watching Eve’s reactions. She wasn’t used to being the one in charge.

“Like this?” Lauren’s question was more of a taunt.

She penetrated Eve again and again with her fingers and re-introduced her tongue. She was more controlled this time, trailing her tongue back and forth, slow and serpentine.  Eve was releasing her moans in episodes, the melodies becoming more complicated. Lauren felt Eve’s pussy squeezing her fingers and getting tighter. Eve’s moans reached a higher pitch almost exploding when Lauren stopped.

She crawled back up, unbuttoning Eve’s shirt as she did. She pulled the decorative fabric away, and stared at Eve’s tits. She wasn’t used to them yet, but knew that she wanted to drive her crazy. Her fingers engaged Eve’s slippery clit as she licked and nibbled. Eve arched her back and groaned.

Eve straightened up, pulling Lauren’s underwear down from under her dress. She dragged her back on top, and guided Lauren’s hips against hers. This time, it was Eve’s fingers that descended, focusing first on Lauren’s gushing neglected pussy. She pinched and rubbed her clit, biting at Lauren’s ear.

Lauren could feel Eve starting to take control. It made her feel weak. The apprehension crawled up her neck until she fought back, pushing against Eve’s aggressive transporting hands. Eve trapped her into another kiss and secured both of her wristed behind her back with one hand. ‘Fuck,’ Lauren thought as Eve raked her lips down her neck.

Lauren was grinding against Eve’s thighs. Eve bit her neck, hard and she moved faster, her hands still trapped behind her back. Eve reached down to pleasure her own pussy with her other hand until her breath caught. Eve let out a desolate cry as her thighs trembled and jerked.

When she recovered, she smiled and released Lauren’s wrists. She stood up and walked her to a wall. Her fingers reached up Lauren’s dress and plunged inside her. Lauren felt suffocated by the sensation budding inside her. She was so close. Eve slipped her fingers out and rubbed Lauren’s clit before pinching hard. Lauren cried out as Eve injected her fingers again, pumping until she was gasping for air over her shoulder and dripping wet. She was enveloped in a riveting maze of tremors.

She leaned against the wall and caught her breath. Eve leaned one hand on the wall, bracing herself.

“You don’t normally fuck women do you?” The question slapped Lauren in the face. It was that obvious.

“No, was that a problem?” She dished out attitude before she could stop herself. Eve laughed.

“Not at all. I was about to say, if that’s the case, maybe I should have sex with newbies more often.” Lauren relaxed from her tense rage stance.

“Well, I’m not just some average newbie,” Lauren said. Eve looked her over with interest, a game in her eyes.

“I don’t know, I might still need some more convincing.” 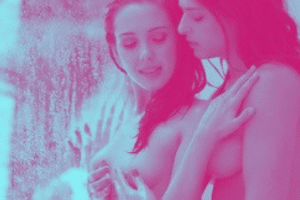