“Can I open my eyes now?” I asked my boyfriend, Mason. I heard his voice calling back from down the hall, telling me to keep them closed for just a few moments longer. I kept my eyes squeezed shut, and even went so far as to cover my eyes with my hands. Mason had been hyping up this surprise for quite some, now, and I was excited to finally see what it was. Today was my birthday, and Mason had been bragging for the past few days that he was going to get me something that I have always wanted for my birthday. Whenever he brought the subject up, my mind inevitably began to race with ideas. What could he be getting me? Maybe he was getting me some article of clothing, or some piece of jewellery, or some kit of makeup that I had always wanted. However, I doubted that this was the case because Mason was hyping up this gift as if it was something more special than makeup, clothes, or jewellery.

I remained seated on the living room couch, waiting for Mason to arrive with my gift. A few minutes later, I heard his footsteps as he entered the living room. However, I also heard what seemed to be another set of footsteps. I thought that this was odd, as we were supposed to be celebrating my birthday between the two of us. At first, I brushed it off as my mind just playing tricks on me since my eyes were closed. However, the more I listened, the more I heard two sets of feet walking around the living room. Not only that, but I could have sworn that I heard another person’s breathing. Now, I was genuinely confused. Who was this second person and why were they here? I was anxious to open up my eyes and find out, but I wanted to wait for Mason to give me the go-ahead before I did so.

Finally, to add to all of the confusion, I felt people sit down on the couch on either side of me. Now I wanted to open my eyes just to see who the second person was, I was not even that concerned about the gift anymore. “Okay, Johanna, you can open your eyes, now,” Mason told me.

I reached over to both Dylan’s and Mason’s crotch and began rubbing and stroking their cocks through their underwear at a teasingly slow pace. In response, Mason and Dylan put their hands all over me. I loved feeling like the center of attention like this. The sensation of their manly, strong hands groping, and grabbing at my body got me so wet. Initially, Mason was taking the lead, and Dylan was simply following along. As time wore on, though, Dylan got braver and braver and started to take initiative. While Mason’s hands remained on my breasts, grabbing and squeezing them, I felt Dylan’s hands making their way up my inner thigh. I was wearing a skirt, and I gasped when I felt Dylan’s hand move under my skirt and up to my soaking wet cunt. He rubbed and teased my sensitive, eager clit through my lacy panties, drawing soft and gentle moans from me. 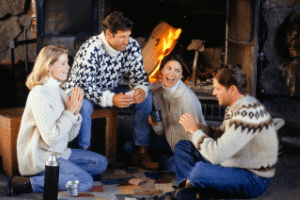 Truth Or Dare Leads Couples To An Enjoyable Evening