When you come out to your partner as polyamorous, many things can happen. They may be on board with it, they may be against it, or they may decide that even if they’re not poly, you should explore your desires and it won’t be an issue in the relationship.

Each scenario has its proper course of action. If you find yourself on the latter, many things will need to be worked out between you and your partner. To help you gain perspective, today I’m going to tell you my story.

I grew up in Russia, an environment where it’s not only wrong to be queer, it is persecuted. At the time, even among my queer friends, the only term we knew how to use to describe each other was “bisexual”. We had no idea we could have an identity outside binary genders and traditional, same-sex marriage.

Even though I grew up in such a close-minded environment, I had so much love to give to so many people. It didn’t matter to me what age, gender, or sexuality they had. However, I didn’t come out unscathed. I had doubts about my mental sanity and I had a lot of trauma as well. I was abandoned by my parents, so did that mean I was just lonely? Was I subconsciously trying to fill that void? Or was I polyamorous?

On my 18th birthday, I left for New York. I was in college and one time my long-distance boyfriend at the time came to visit. At this point, I had a vague idea of polyamorous relationships but I hadn’t taken a part in it just yet. But at the time, I was developing feelings with a lesbian from one of my classes.

When my then-boyfriend was in town, I thought it would be great to go to her house and have dinner. I was excited for him to meet “my best friend”; needless to say, I was lost, confused, and definitely in the closet.

That night, while my boyfriend was sleeping on the couch, she and I had sex in the room next door. This is what I was longing for since I was twelve; I wanted consensual sexual attention from another queer roman. Of course, he discovered us, and it was a heart-breaking scene.

He flew back to Russia right away and we couldn’t even be friends after that. At the same time, she told me she didn’t want a relationship at the moment but she still wanted to be with someone. There were so many red flags there, all ignored. Just a word of wisdom: starting a relationship that way is not healthy and it’s not ethical polyamory in any way.

But at the time, I agreed. At first, we didn’t have a conversation about what polyamory meant for each other, and it didn’t seem like it was going to happen. When I finally slept with somebody else, she was very upset about it, and we decided to discuss “what was allowed.”

Hindsight is 20/20, so looking back at it, I wish I had been honest, stood up for myself, and set clear boundaries about what I wanted, not just from her as a “primary partner”, but also about how I wanted to interact with secondary partners. I didn’t, and ultimately she cheated.

And yes, I know you may be wondering how it’s possible to cheat when you’re in a polyamorous relationship. Oh, it’s possible. Cheating means breaking a commitment, being dishonest, breaking a boundary. If your partner doesn’t tell you about other partners or breaks the rules and has sex with someone “off-limits”, that’s cheating.

The Straw that Broke the Camel’s Back

At the time, I was fired from my first job and I was at a very low point in my life. Without thinking, I purchased a ticket back to Moscow to have some family time. This trip happened at the same time my partner was going into spring break, and she went back home.

She texted me about how she reconnected with an ex and I thought that was strange, but I wasn’t paying much attention; I was too hurt. One day before my flight back to New York, she spent the night at her friend’s house, which is what made me feel like something wasn’t right. I had so many things to worry about and I was so hurt that the first thing I did was ask if they cuddled. Of course, they did a lot more than that, and my heart was finally broken.

I was truly inconsolable and I nearly cried my eyes out as I packed my bags and wondered if I should even go back. I spent 11 hours on a plane crying and wondering why did this have to happen? Why couldn’t we communicate with each other?

For four months she lived on the living room couch and she refused to give up the lease. Shortly after, she started video chatting with someone new she met on Tinder, not a care in the world.

She finally moved out and I was free to grieve and heal. I took the time I needed to be okay before I revisited polyamory. Slowly but surely, my life was getting back on track. I found a new job and I started meeting new people, dating and I was even getting serious with some of them.

And, as it turns out, I feel for a monogamous person. I met her at work and I just couldn’t stop thinking about her. I caught her glances and her shy little smiles. I noticed she liked reading books during lunch and created amazing playlists for her workday. A little while later, she invited me to one of her open-mic shows. I was impressed by her soft, angelic voice, and we started dating soon after.

She knew I was polyamorous all along and, at first, she tried to keep things light and enjoy the moment. But at one point, I rushed into things and I didn’t think I would be able to be in a relationship with a monogamous person. I felt very guilty about liking other people and it did hurt her when I went on dates. However, we talked about it extensively and after a lot of trial and error, we were eventually able to find the right balance.

How to Make It Work

Part of the process of making it work between us required unlearning and re-learning a few things. I had to unlearn that monogamy was outdated and harmful, and she had to unlearn that polyamory was just sleeping around. We got together and made lists about the positive things about each other’s lifestyles. I learned that consistency and me-time was important in monogamy, and she learned that one person can’t fulfill every need in a relationship.

I didn’t change my identity during this process; I am still very much polyamorous, I’m just not engaging in other relationships at the moment. Just like a bisexual woman doesn’t stop being bisexual if she starts dating a man, for example. We’re simply choosing the one that makes us happy.

This relationship has taught me how important friendship is within a romantic relationship. We’re often taught that intimacy is something we only share with romantic partners, but learning you can open up to a friend just as much and that they can love you and support you no matter what is an amazing feeling.

This is why I think finding a community to give you strength is essential; love is limitless and boundless after all, it shouldn’t be reserved only for the people you share your bed with. Sex does not equal intimacy, affection, or love. These things can be experienced separate from sex.

I also learned that being in multiple relationships and having many people who rely on you for moral and emotional support can be very tiring. People in hierarchical and non-hierarchical polyamorous relationships prioritize their time. I realized that I didn’t do that; everyone else was a priority to me except myself!

It’s hard to admit it, but I have hurt people’s feelings simply by not giving them the care and attention they needed and deserved. My monogamous relationship has truly grounded me and my expectations. It has taught me to communicate more clearly about everything and to truly listen, not just to my partner, but also to myself. I’ve discovered that, when you care for more than one person, you can easily lose sight of what’s important.

I won’t lie, I still have feelings for other people, but as my sexuality and desire evolve, I can satiate my needs and explore new horizons with my monogamous partner. There are many ways to involve other people in your sex life without breaking the values of your monogamous partner. The key to finding the ways that work for you lies in communicating honestly and openly, and focus on gaining a better understanding of what turns you on, what kinks you’re both interested in, and more.

I see this as a new chapter, full of new adventures and exciting discoveries. If you’re in the same situation; if you’re poly but your partner is monogamous, don’t assume things about each other.

Instead, communicate, break down your walls and stop thinking about what’s “normal”. This is the only way to learn about what you truly desire and how you can make things work without all the mess. At the end of the day, you write the rules of your relationship, and this is no exception. I’m poly and she’s monogamous, but this is how we make it work. 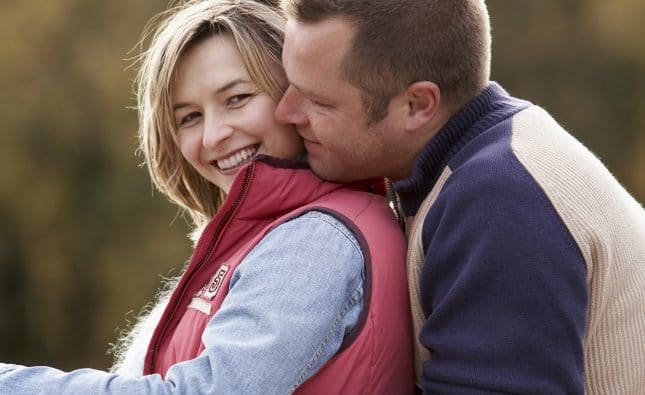 Navigating the Waters of Polyamory