Tabuu Wrap-up: As long as your hard limits are not being violated, trying new things is always a good idea. It can lead to wonderful things!

However, not enough people talk about the kinks that are not personally interesting but are also not out of bounds. For example, I feel that way about bondage. It doesn’t interest me, but it’s not off-limits either.

My partner, on the other hand, is really into it. So, my decision to give it a shot was mainly based on my desire to help him experience that kind of pleasure. It’s important to note that even though it wasn’t particularly interesting to me, I decided to try it of my own free will. It’s important to make that distinction. Once I tried it, my willingness to continue doing it was based on what I discovered it did for our relationship.

But if I’m being honest, bondage would make me relinquish a lot more control than I was comfortable with. That being said, I didn’t feel any aversion towards it as I do for other types of kinks, such as needles or urine. If you’re into that kind of kink, no judgment here! It’s just not for me.

I was very indifferent about bondage, but I would be lying if I said I wasn’t a bit curious about it. I was not interested at all in certain types of restraints or ropes, but when my partner talked about different kinds of ties, I listened a bit. For the most part, I zoned out. There are so many things about kink I’m really into. Spank me? Oh yes. Pull my hair? Yesss. Control my orgasms? Please. But bondage? Whatever.

When you’re in a relationship, it’s not uncommon to try things that you don’t really want to do simply because your partner is into it. As long as it’s your choice, it’s not a problem. If you’re manipulated or forced, that’s another story. I wanted to please him and give him something he really wanted. As long as he could still respect my boundaries, why not? So I gave it a shot.

Trying Bondage for the First Time

So, I finally agreed to give bondage a try. I have to say, it helped a lot that he picked a beautifully colored rope that was super soft. He was very smart about that. He knew I was a bit reluctant, so he made the experience as enticing as possible. Seducing you with the promise of pleasure is what a dominant/submissive relationship is all about. Taken my consent for granted is problematic, not to mention it can lead to abuse.

Ultimately, when you’re open to try things that are not on your list of no/nos but give your dominant a new role can be very exciting. That’s what I wanted to give to him; a moment he had been looking forward to.

I felt really awkward at first. I had no idea what to do as he tied me up and got me into position. But I soon discovered all I had to do was be still. However, that wasn’t easy for me. I was shifting my weight and moving my arms. So he gave me a smack in the ass as a warning. That was it for me. He started touching me, kissing me, and I was overcome with desire.

He wound the rope around me, creating patterns and it got tighter and tighter. It was bearable, though, like a hug. The more rope he used, the more secure I was. Soon enough, I couldn’t fidget anymore, and honestly, I had no desire to do that. I felt controlled to a point that it was incredible and I enjoyed the connection we shared at that moment.

What Bondage Has Done for My Relationship

After the first time, bondage was no longer a limit. Once I experienced the unique kind of pleasure bondage provides, I was into it. I found out that when the ropes come off, you actually feel more naked. That first experience ended with one of the best fucks we’ve ever had, which included all the kinks I really love. We were fired up after trying something new and we had a deep desire for intimacy.

Even though I’m a lot more open about it, bondage is not something I request. But whenever he’s excited about trying a new knot or rope, I’m much more into it than before. Being super still is very difficult for me even now that we’ve done it a few times. What I love the most are the smacks until I do stay still.

I discovered that bondage allows me to submit to my dominant on a deeper level and it’s extremely fulfilling for both of us. I truly enjoy being teased, spanked, and I like rough sex, and everything he does during bondage feels like a promise for what will come later, once I’m free. Or even before that!

So, bondage is not about rope or being tied up, at least not in our relationship. Being restrained and limited as he forces my orgasms is just another form of submission. This form in particular strips me away of control entirely. The idea scared me going in, but now I look forward to it. He never does the same thing and he always varies the toys and techniques, but the results are always the same. Explosive.

What I Learned from Letting Go

As long as a kink doesn’t cause a negative reaction, I encourage you to be open to try new things. You never know how your mind can be blown! The key is having a partner you can trust. But believe me when I say it’s worth it to come out of your comfort zone and let go. This experience has taught me that there’s a lot to be gained from trying out things that make me indifferent. Now, it doesn’t mean everything I try will provide such a magnificent experience, but the possibility exists. And that possibility is worth exploring. It’s really, really worth it! So, the next time you come across something that makes you go “meh, whatever” don’t knock it until you try it.

Want Your Partner To Be Your Dominant? Here’s How To Start 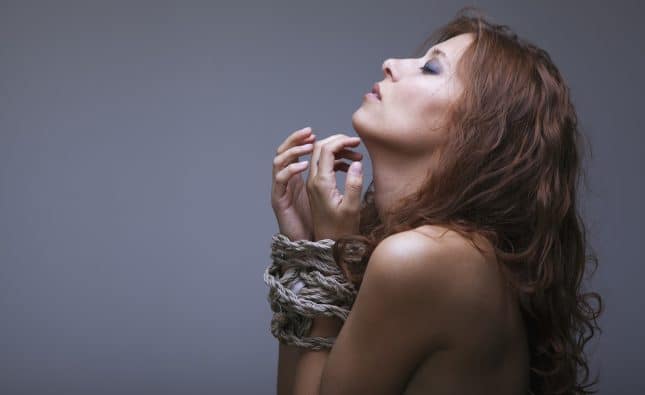